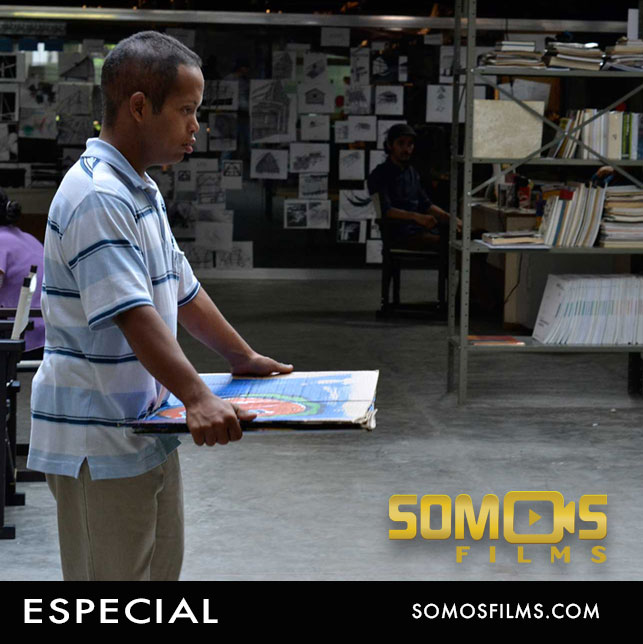 SOMOS Films, the company dedicated to the production of Spanish feature films, property of SOMOS Group, announced its new film, Especial.  The Venezuelan-American coproduction will be shown on the big screens in 2020 with a controversial and delicate theme: Chuo’s story, a 23 years old young man with Down syndrome who dreams about being a famous artist.

Luis Villanueva, President of SOMOS Films expressed his satisfaction: "with Especial, we add a unique movie to our catalog. It is original, touching and well-produced. We’re certain that the movie will be well-received and recognized by its plot and its professional work in photography, editing, acting, narrative and direction in general. We feel satisfied and proud by the way the movie handled such a delicate topic, expressing love and respect for people with disabilities.”

Especial tells the story of Chúo and the ups and downs he faces growing as an exceptional young man. Chúo faces the absence of his mother and lives with his father José, a frustrated percussionist who takes refuge in alcohol. José does not know how to handle the emotional needs of his son. Chúo is a talented young man who wants to participate in the Annual Contest for Artists with Down syndrome in Venezuela for his first time. All the while, Chúo is in a discovering phase of his sexuality which is further heightened by his condition, bringing the expected frustration. At the same time, he deals with the conflicts created by the demands and the rejections that people with Down syndrome sometimes face.

Greyber Rengifo (a young man with Down syndrome) stars as the lead male actor, along with the percussionist Ruper Vásquez and the special participation, both in music and in acting, of the renowned Venezuelan jazzman and salsa artist Alfredo Naranjo.

In words of Ignacio Márquez’s (the director), “Especial is a very humane and honest movie, full of hope, which will reveals the unique power, sometimes hidden from the majority of people, that Down syndrome individuals have. This film shows the discrimination that society exerts over people they consider different and how art can build bridges. It show the miracle of loving and accepting ourselves the way we are and will make each spectator a better person after watching it.”

Especial is an interesting piece because of the human aspect of the story and also for the excellent performance and direction of the film. Both the production companies and the director of Especial faced the challenges of a production of this kind in a masterly manner. The film will be shown at Film Festivals before its massive distribution and exhibition.

Produced by José Antonio Varela, Especial is the result of the union of efforts among SOMOS Films and the Venezuelan production companies El Dorado Films and Divarte Cine, aiming to a production with quality and Latin-American tones, but with a universal character.