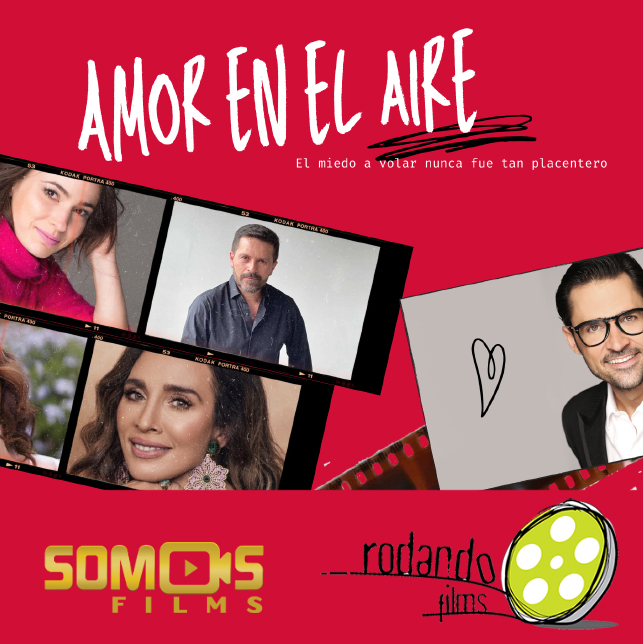 MIAMI, Fl., March, 2022 - SOMOS Films, the Spanish-language feature film production company part of SOMOS Group and Rodando Films C.A, will produce the film Amor en el Aire, in the popular comedy genre. The production, to be carried out in Colombia, with the support of the Bogota production company TRAMA AC and with a stellar multinational cast, will start shooting on the 23rd of this month with direction, script and production by Carlos Daniel Malavé and will have a total of 8 weeks between pre-production and shooting.

Amor en el Aire tells the story of Jimmy, a soap opera actor, famous forever, who is at that age where roles are few, because he is too old for a leading man and too young for a dad. When his manager presents him with a role for a Mexican series, he finds himself with the small problem that he suffers from a visceral terror of airplanes and must travel to another country. Jimmy meets Andrea, a flight attendant who has always wanted to be a pilot and works hard to achieve it. When she meets Jimmy, she says he seems to be a somewhat vain and silly man, but little by little she will fall in love with her imperfection. Amor en el Aire features stars Jean Paul Leroux and Paula Castaño, with the participation of Colombian talents such as Julio Cesar Herrera, Luly Bossa, Argentine actress Lorena Meritano, among others.

Luis Villanueva, President and CEO of SOMOS Films and executive producer of the film stated: “We are very satisfied with this second film that we produced together with Rodando Films, with whom we previously produced the film “One Way”. Amor en el Aire is an important addition to SOMOS Films' growing catalog and in a very popular genre for audiences everywhere. It is a nice story that will make the audience laugh and have a good time. The experience of both companies and the direction of Carlos Daniel Malavé are a guarantee of quality at the level of the productions that appear in our catalogue. We are very happy for the start of this production.”

Carlos Daniel Malavé, director of the film, said: “I hope that this comedy is seen and enjoyed by all the public in Latin America and the United States. I think it has the right ingredients and a good cast, and I am also very grateful to Somos Films and its CEO Luis Villanueva for once again trusting one of my projects"

Carlos Daniel Malavé, with an extensive filmography, has nominations for important awards, his film Blindado was the candidate for the 2020 Goya Awards for Venezuela and won 2 awards from the Film Academy of his country, he has also been nominated for the Hollywood Florida Film Festival, where it received the award for best feature film and the Manhattan Film Festival where it won the award for best international feature film.

Amor en el Aire joins the portfolio of SOMOS Films, a company that already has 10 productions in its catalog, several of them with participation in international film events and produced in different countries such as Mexico, Venezuela, Puerto Rico and others.

About SOMOS Films: SOMOS Films LLC is a company specialized in the production of films in Spanish and made up of a team of highly specialized professionals. SOMOS Films is part of the SOMOS Group of companies and participates in co-production and own production projects. The company generates, evaluates and develops ideas, with a philosophy of flexible participation in the different phases of film production.